Neverwinter Ravenloft brought the new endgame dungeon Castle Ravenloft. If you are familiar with most group content in Neverwinter, you will find this dungeon stands out as somewhat unique in terms of design. It features a very heavy focus on mechanics and a limited one on actually dealing damage to opponents. This guide aims to explain these mechanics, in order to hopefully make this dungeon more accessible to players. It was written and authored by Janne Moonmist, Lightbringer, and Sharpedge. Note that the pictures and videos are from prior to module 16, however the explanation of mechanics has been updated to post module 16.

The monsters in Castle Ravenloft in Module 16, for some obscure reason have 46,900 counter stats, meaning you need the following stats to cap for running it:

However, Capping for CR in module 16 isn’t really required and so long as your ratings are capped for LoMM, you shouldn’t need to worry too much about CR.

There are five achievements in Castle Ravenloft, as follows:

In order to keep the others away, one person is given the job of preoccupying the remaining sisters who are not engaged through the use of the tome mechanic (explained further). As a result of this, the fight will always be fought with only four players fighting and one player kiting. They have the following attacks:

Quick Tip
You can enlarge the debuff bar on PC, by binding the following command: /bind key “gensetearlyoverridefloat Statusself_Debufflist scale 2”. Replace 2 with any number, where 2 will make it twice as large, 2.5 two and half, and 0.5 make it smaller. This especially useful for first run for tanks as it enlarges the stack numbers too.

Periodically the bosses will summon Paranoid Delusions who will each stun one party member for five seconds. Gaze of Doom and Wail of Suffering are the attacks of the Paranoid Delusions, they do very little damage (roughly 2000 damage premitigated) and are more an annoyance than anything else. The person holding the engaged sister’s aggro as well as the person managing the tome are never the ones targeted by the delusions.

Whenever a sister is killed, they enter a phase where the remaining sisters are “gathering their fallen sister’s power.” This is a DPS check and if you fail to kill the fallen sister fast enough, there is a party wipe. It can be identified by the large text that appears in the center of the screen. When this happens, players should head back to where the sisters first spawned in the center of the room. 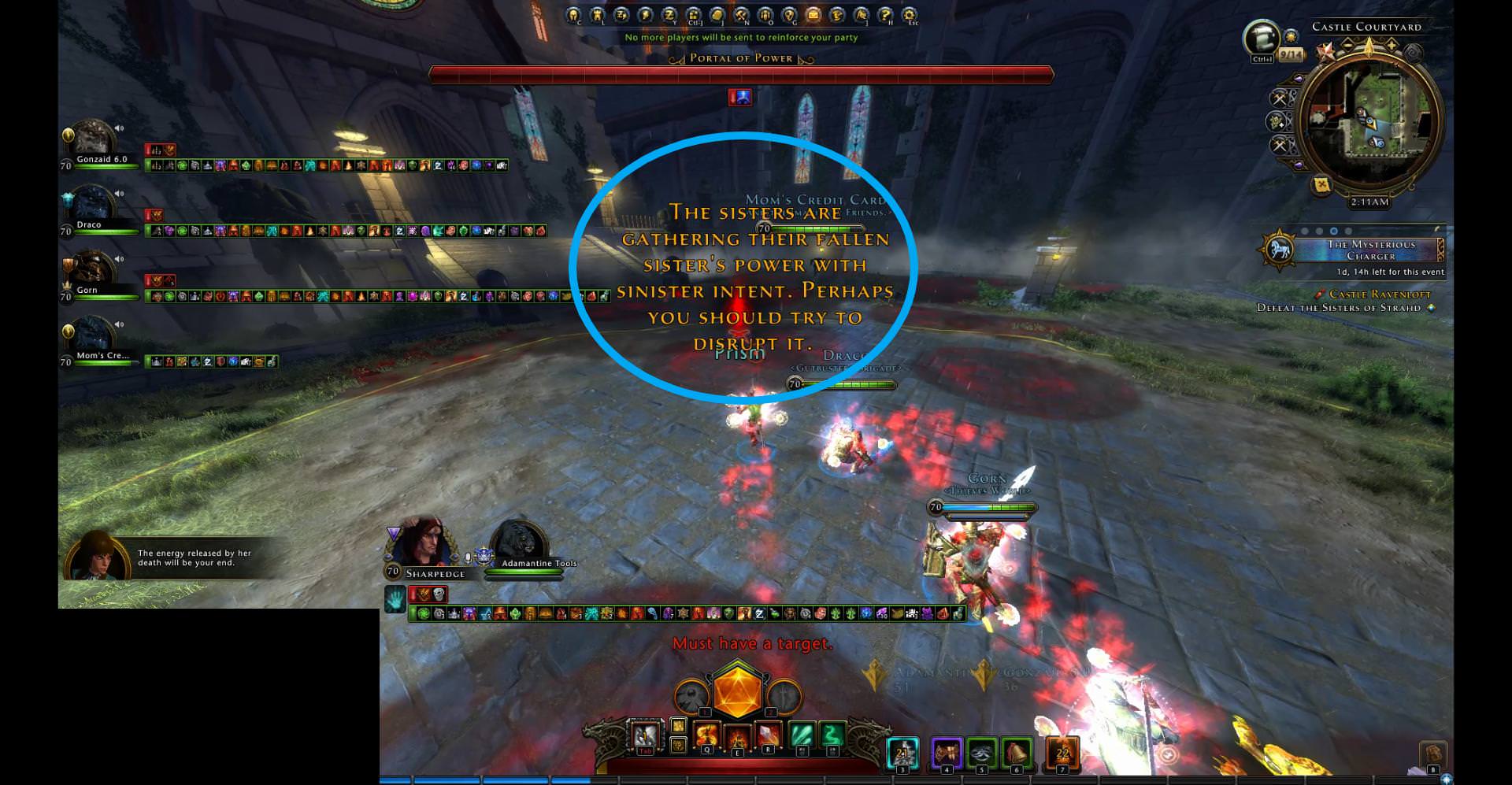 Here is a video of the first boss, from a Control Wizard’s perspective:

The person on tome duty has the job of managing the aggro of the non-vulnerable sisters. The first question is, who should this be? In general, you want the support who contributes the least to the parties damage to be the one who carries the tome. That will likely be one of the 3 damage dealers, but try not to hurt any egos in the process of asking them to use it!

The next question is, what does this person have to do? Their duty is to entertain the sisters/sister not currently in combat, away from the rest of the party. This is accomplished by using the tome powers. Picking up the tome changes your hotbar to another set of encounters, preventing you from using your own. However, you can still use artifacts and mount powers as well as items on your quick tray.

After pulling both far enough, usually it’s enough just to hold one sister and the second will remain in its vicinity, and thus kiting them far away from the party. Once the Daily Power (Stunning Revelation) is charged, you can move in close and use it for a longer area stun, catching both sisters, or one if the other broke off and you need a breather to go and fetch her. Be careful not to be damaged when doing this as it causes you to lose Action Points.

After one sister is dead, it becomes much easier as you no longer need to alternate between the sisters and can focus on the sister left. Both the cooldowns of the at wills and encounters and the daily power benefit from cooldown reductions and AP Gain, so you can quite easily keep the sisters permanently stunned if you use the Insignia Bonus Artificer’s Persuasion and one of the Dragon Heart artifacts. Just miss with the heart every so often and keep spamming the daily whenever the stun falls off.

For first attempts or if you are not accustomed for tome duty it’s recommended to get some health potions slotted in the quick tray even if you usually do not use those. As the area will be covered in red zones. The healer in the group will need to pay attention to this player’s HP bar to make sure they do not die. This is especially important if the tome holder is in trouble or made a mistake and stepped in the red pool.

Here is a video of the first boss, from a tome user’s point of view:

Whilst I could list all the individual attacks of this boss like I did for the other bosses, it is not actually necessary to know most of them in order to beat this boss. This boss is mainly intended to be a skill check for the tank and ends up being a case of just sit and burn for the DPS. The DPS in this fight should stand behind him, but not completely at his rear and rather about 20 degrees off. This is because some of his attacks hit directly at his back. A good place to stand is here: 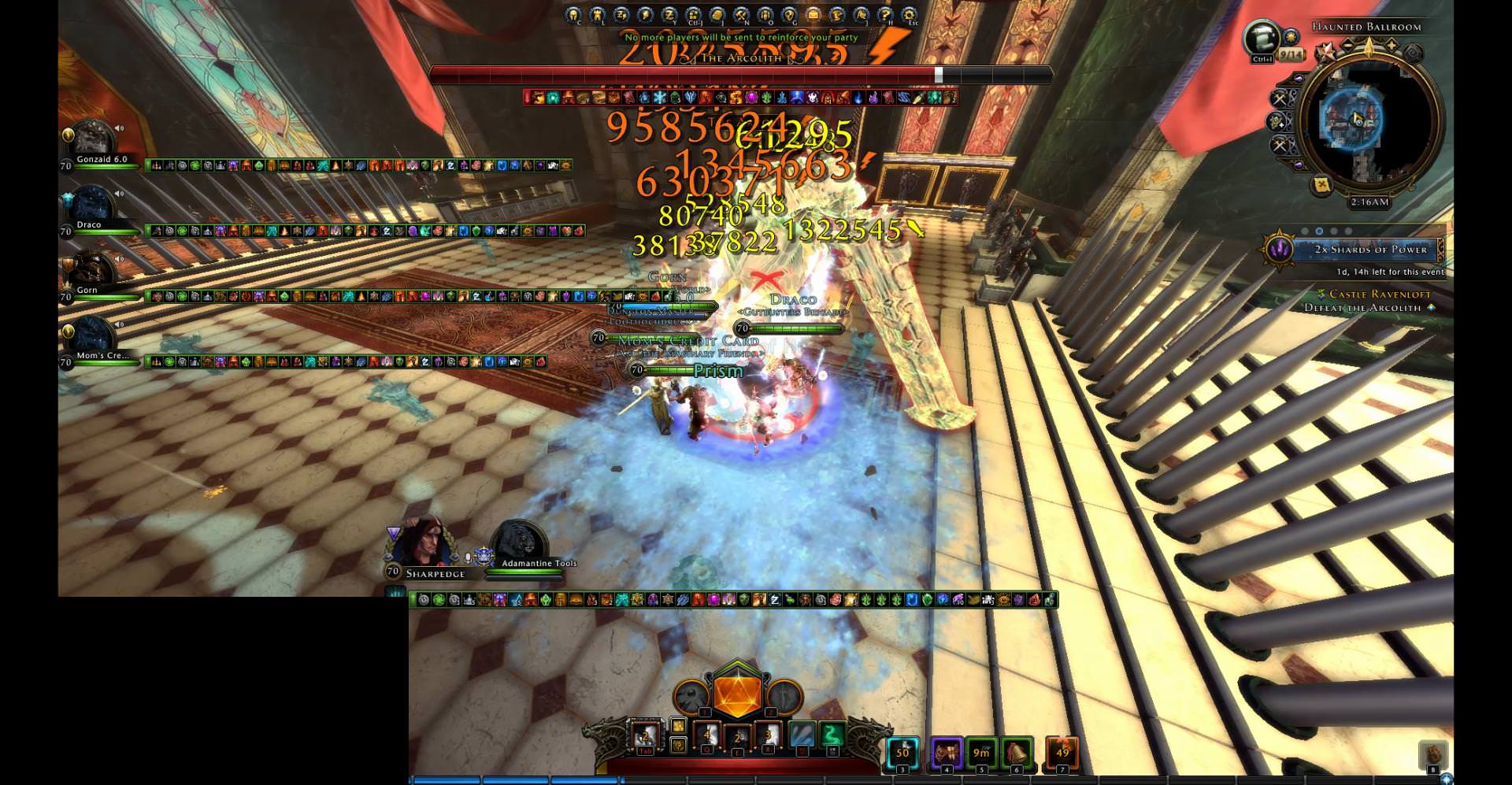 When the boss starts spinning, it cannot be damaged until it crashes into one of the four pillars in the room and once you run out of pillars, you automatically fail the fight. It is crucial that in this fight, the tank maintains aggro and absorbs every hit that they can, especially in slower groups. When the Arcolith collides with one of the pillars via the spin and causes the pillar to crush, it will be stunned for a moment. During the duration of that stun the Arcolith is under the effect of a debuff and takes greatly increased damage.

Note: When the boss slams his sword into the ground and crunches his fist together, he is about to do a heavy attack directed at whoever has aggro called “Herausforderung” (challenge). The tank must absorb this, otherwise the boss will start spinning. If you get multiple spins ahead of time, this is most likely the cause a wipe.

Be careful to not allow the Arcolith to touch the pillars with his sword except when he is spinning, he can destroy them with regular sword attacks, not just the spin. Aside from this, there is not much of importance to know about the fight.

Here is a video of this fight, from a Control Wizard’s perspective:

The Sunsword is the second “replace your powers” mechanic in this dungeon and requires a bit more learning in order to use. Like the book, picking it up disables your feats and boons as well as replacing your skill bar. It has the following powers:

Strahd Von Zarovich has the following attacks and mechanics:

This boss has many mechanics, but the essence of the fight is stick together as a group, from the start when the group picks one spot to tank the candle and bat swarm, to the following kidnap phases where it is important to move in the same direction (usually clockwise) to kill the delusions faster and not get surprised and killed by the bat swarm during the movement.

There are only two main executioners within the dungeon, aside from the ones which appear during the kidnap phase. They will mark one enemy, who is then controlled for a long duration of about five seconds. Anyone else is safe to attack or approach them, but take care not to stand next to the marked individual, as the executioner’s attack has a small area of effect and will kill you as well. Notice that the executioner is very slow both to move and to attack, simply kiting him will be more than enough to handle it.

For anyone looking for some extra information relating to this dungeon, this is where it can be found. First off, here is a list of enemies which are classed as “undead” for the purposes of rings or overloads: 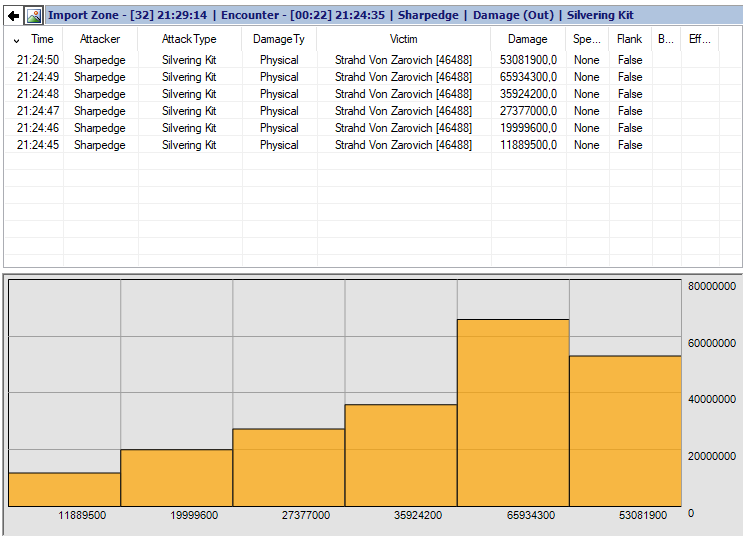 Whilst this can be used to cause instant Strahd kills on any class at all using the Sunsword, a better use of it is for killing the second boss, as even if you kill Strahd instantly, you still need to wait out all of his animations.

Janne Moonmist: Proofreading, making suggestions, she added a lot of information on the first bosses Theft of Vitae mechanic and rewrote large portions of the guide.
Lightbringer@greyjay1: Providing the pictures of the Tome and the Sunsword, proofreading, adding more information.

Zornhau isn’t an overhead slam, it’s his laser machine gun attack. The tank is rooted during the attack.